Spring has sprung. The trees are saturated green, and flowers are sprinkling bits of diversified hues among the spring foliage. It’s a beautiful time of year that boasts freshness and a change in scenery.

Seasonal allergies emerge with the changing of seasons as weather shifts and the various trees, flowers, grass, and weeds pollinate. According to Centers for Disease Control and Prevention (CDC), nearly 60 million Americans are affected by seasonal allergies every year leading to pollen-linked medical costs that exceed $3B with nearly half the costs going towards prescription medication.

What are Seasonal Allergies?

Seasonal allergies, also known as allergic rhinitis or hay fever, are often caused by allergic sensitivity to pollen from trees, grasses or weeds, and airborne mold spores. According to the American Academy of Allergy, Asthma & Immunology, approximately 8 percent of Americans experience hay fever.

Seasonal allergies occur when the immune system detects an airborne allergen, such as pollen, as a threat and responds by producing Immunoglobulin E (IgE). IgE are antibodies that bind to mast cells and basophils – normal white blood cells – activating the cells and causing the release of histamines. Histamines then produce the symptoms of an allergic reaction.

Signs and Symptoms of Seasonal Allergies

Seasonal allergy symptoms can affect your airways, sinuses and nasal passages, and skin. They can range from mild to severe. The most common symptoms of seasonal allergies are:

Some symptoms of seasonal allergies are similar to those associated with the common cold, and COVID-19. If you’re unsure of what your symptoms are indicating, the below graphic can help differentiate seasonal allergy symptoms from other conditions, such as COVID-19. 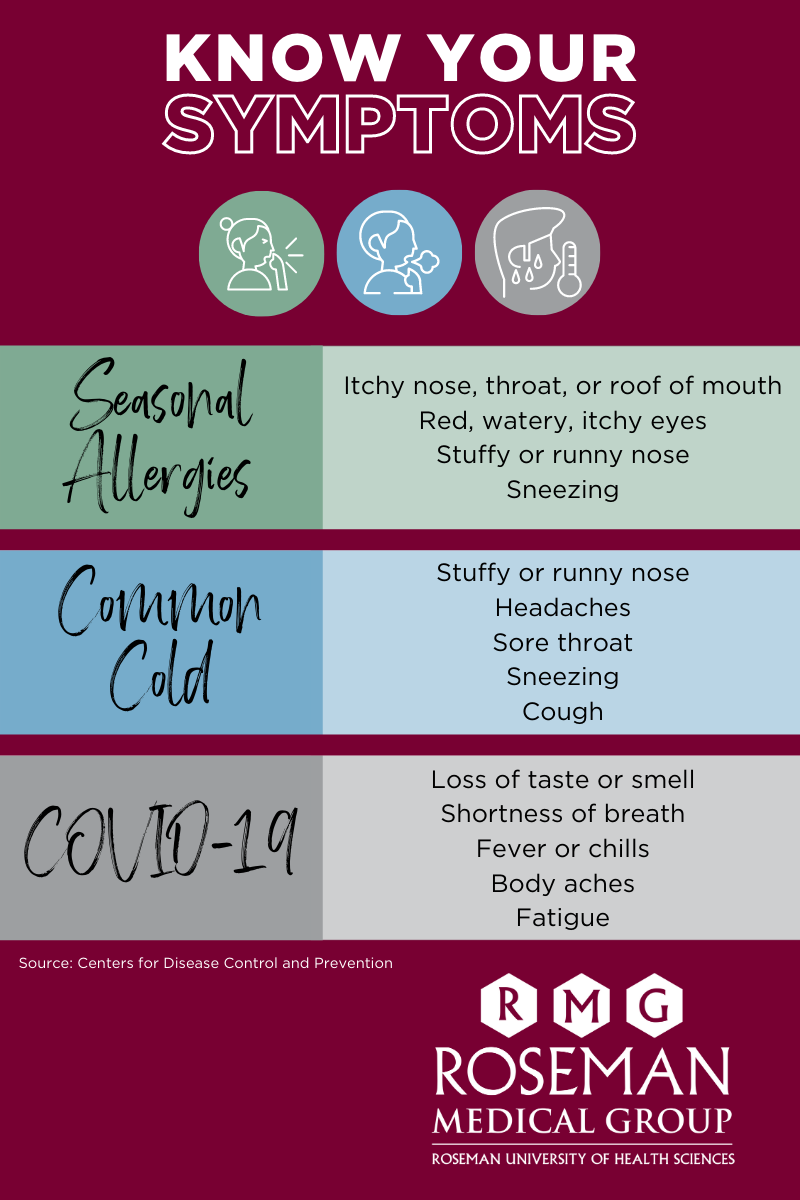 When do Seasonal Allergies Occur?

Pollen releases from trees, flowers, and grasses in the spring and summer months. However, airborne allergens produced by weeds can cause havoc in the fall.

During early spring and summer, Nevada encounters an increase in pollen counts due to Cedar, Elm, Ash, Mulberry, and Olive tree pollen, as well as grass pollen. As fall approaches, the combination of the warm days and cold nights give way to new airborne allergens from Sagebrush, Elm, grass, ragweed, and mold spores.

Although timing and severity of seasonal allergies varies across the United States, several factors can influence exposure and symptoms, such as temperature, rain, and wind. Temperature can influence how quickly allergy season approaches by causing plants to pollinate early and allergies to occur sooner in the year. Rain can increase pollen count by releasing smaller particles into the air, promote rapid plant growth, and lead to an increase in mold. Wind intensifies pollen counts as it keeps the lightweight pollen particles airborne and can carry them up to 500 miles.

Although seasonal allergies cannot be cured, there are several measures you can take to help reduce your exposure to pollen and manage your allergies.

Taking control of your environment can help reduce your exposure to irritating allergens, as well as help alleviate symptoms.

Medications have proven to help control symptoms. Various medications are available, but it’s best to try different over-the-counter medications to see which work best for you – as effectiveness varies by person.

Antihistamines such as Benadryl, Zyrtec, Claritin, and Allegra block histamine receptors. Prescription medications, such as steroid nasal sprays can help as well. Taking allergy medicines up to one to two weeks prior to the onset of pollen season can help prevent inflammation and ease symptoms.

In severe cases, your doctor may recommend immunotherapy (allergy shots). Immunotherapy has helped reduce hay fever symptoms in about 85% of people with allergic rhinitis, according to America College of Allergy, Asthma & Immunology. Allergen immunotherapy is conducted by a series of injections that expose you to small amounts of the allergen for your body to build tolerance.

Are you experiencing symptoms of seasonal allergies and having difficulty finding relief? Roseman Medical Group can help you find relief. Our healthcare providers provide quality, empathic, and patient-centered care for your overall health and well-being. Contact us at 702-463-4040 to schedule an appointment.